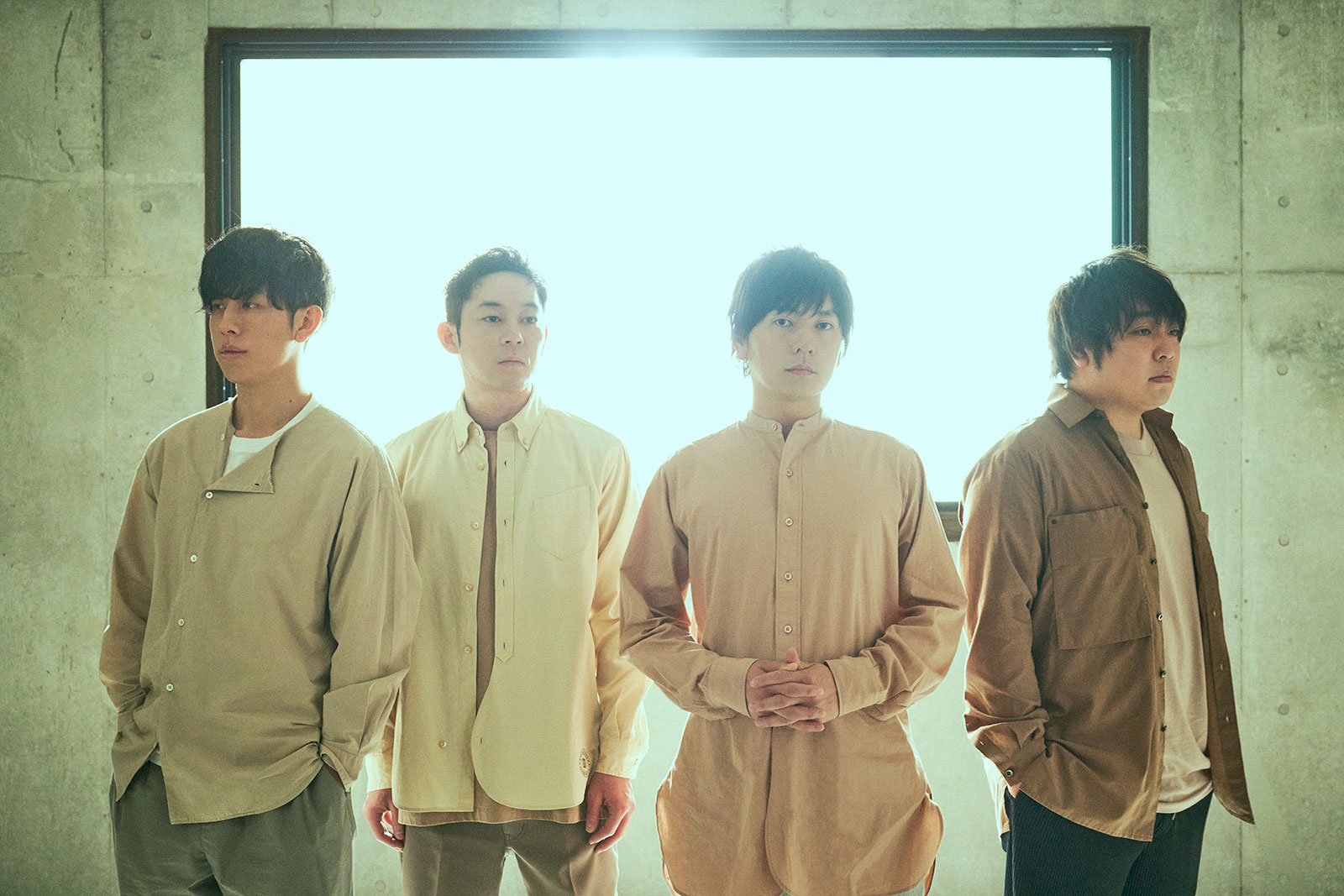 Ryuta Yamamura (Vocal), Kazuki Sakai (Guitar), and Genki Amakawa (Bass) were performing as an acoustic band and later, Seiji Ogura (Drums) joined to form flumpool in January, 2007.
In 2008, their first single (online downloading only) “Hana ni nare” was taken for au ”LISMO!” TV commercial which was vastly broadcast, and there were a million of downloads for just first 10 days (now 2 millions). The second online downloading single “Over the rain～Hikari no hashi～” was the theme song of the TBS drama “Bloody Monday” and also got the high ranking in the music chart. In November, 2008, they released their first mini album “Unreal”, and it got number 2 in the Oricon album chart in the week of the release. They actually became the number 1 new band in 2008.

On February 19th, 2009, their first one-man live tour “flumpool tour 2009 “Unreal”” (6 places and 7 performances) started. Despite of the exclusive ticket sale in advance on their official website, there were 100,000 entries, and the tour was very successful. In the same month, they released their first CD single “Hoshi ni negaiwo” which was no tie-up song and got number 2 in the Oricon single chart. In July, 2009, the CD single “MW～Dear Mr. & Ms. Picaresque～ / Natsu Dive” got number 3 and Live DVD “How did we feel then?～flumpool tour 2009 “Unreal” Live at Shibuya Club Quattro～” which was released on the same day got number 1 in the music DVD chart.
The tickets for their first concert hall tour all over Japan, 18 places and 19 performances, kicking off on July 8th were sold out as soon as starting selling. In the summer of 2009, they participated music fes. and event such as ROCK IN JAPAN Fes 2009 and so on.
On October 22nd and 23rd, they made it Nippon Budokan Lives and the tickets for the both days were sold out as a flash. Finally, they released their first full album “What’s flumpool !?” in December which got number 2 in the chart. On December 31st, they appeared in NHK’s 60th Kohaku Utagassen which is the most nationwide popular TV music program.

In February 2010, the CD single “Zanzou” was released, and in the same month, Live DVD “flumpool tour 2009 “Unclose” Special!! Live at Nippon Budokan” was released and got the consecutive number 1 in the music DVD chart.On March 5th, their first large-scale national tour, 40 places and 46 performances, started.
In June, the CD single (their 7th single including the online download ones) “reboot～Akiramenai Uta～ / Nagareboshi” was released and got number 2 in the chart. In September, the CD single “Kimi ni todoke” which was the theme song of the same titled movie was out and got number 2 in the chart. They made it their 5 consecutive singles getting in the top 3 in the chart. In December, their arena live tour at OSAKA JO Hall and YOKOHAMA ARENA was greatly successful (all tickets were sold out immediately). On December 31st, they performed at their 2nd time NHK’s 61st Kohaku Utagassen.

In January 2011, their second full album “Fantasia of Life Stripe” was released and got number 2 in the album chart. Their 3 consecutive albums got number 2 in the chart.
In 2011, three CD singles of“Donna mirai nimo ai wa aru”,“Akashi”and“Present”were released.
“Akashi”also was written a song for the 78th NHK national musical contest for junior high schools, and it was sung by the choirs all over Japan. And they performed at their 3rd time NHK’s 62st Kohaku Utagassen.
On December 10th and 11th, they made it SAITAMA SUPER ARENA Live. It becomes a record high level for flumpool ,and it was made to win a great success(32,000 persons' mobilization).

In March 2012, flumpool held their biggest ever nationwide tour in 42 places for 52 performances『5th tour 「Because... I am」』. Until September, the whole half an year, there were 100,000 people who came to the show.Also, in July, the theme of this tour『Because... I am』had driven a great attention since it became the theme song of the TBS drama 「Resident～gonin no kenshui」. After the single 『Answer』was release, they also released their 3rd full album in 2 years - 『experience』.

In January 2013, they held 4 Days live in Yokohama Arena, Osakajo Hall. The beginning of their 5th year since debut, they drove 40,000 audiences to their performance. In March, the album was released in Taiwan, Singapore and Hong Kong and held their first even Taiwan solo live concert. In addition to their live performance, they also emceed in Chinese throughout the entire live which garnered positive reactions from the audience. Further, flumpool released the Double A Side Single 「Taisetsunamono ha kimiigainimiataranakute/ Binetsu Refrain」in July. On top of that，in remembrance of their 5th year anniversary debut, they held a 『5th Anniversary Special 2Days Live「For our 1,826 days & your 43,824hours」』 concert on the 1st and 2nd October in Nippon Budokan. They have also made their first collaboration song, 「Belief ～Haru wo matsukimie～」(theme song of the movie 「Oshin」) with Mayday, a very popular rock band among the Greater China. Plus, the complete Memorable Blu-ray&DVD was relased in December.

During their 5th Anniversary year, they started their 6th nationwide tour "5th Anniversary tour 2014 「MOMENT」" in April 2014.
In May 2014, they released their first greatest hits album "The Best 2008-2014「MONUMENT」"which condensed their 5-year achievements.
5th Anniversary tour achieved a great success and attracted 100,000 audiences in total including 4days ARENA SPECIAL at OSAKA JO Hall and YOKOHAMA ARENA, and additional performances in Taiwan and Singapore.
From October 2014 to November 2014, after completing their 5th anniversary year, they held their first school festival tour "Just My Broken'roll Tour". Also in December 2014, they held their first exclusive tour to the members of Official fan club, "INTERROBANG Dayo! Zennin Shugo ～Kanin san Irasshai～".

In January 2015, the band gave a surprise performance at the coming-of-age ceremony held in their hometown, Matsubara, Osaka.
They released a concept disk “FOUR ROOMS” for the first time in almost a year on May 13th, and released “Natsu yo tomenaide ~Your’re Romantic~” on August 5th.

On August 8th and 9th, the band gave their first solo outdoor concert “flumpool Manatsu No Yagai LIVE 2015 ‘FOR ROOTS’ ～OSAKA FIELDS FOREVER～” at Oizumi Ryokuchi Park located in their hometown Osaka. The show ended on a high note, bringing in a total of 35,000 people in two days. On the last day of the concert, the band announced the “flumpool Limited Tour 2015 “R→LOOF PLAN~Otona No Yaneurakeiakaku~”, performed in five limited cities of Sapporo, Tokyo, Nagoya, Osaka and Fukuoka.
At the end of the year, they held their first solo countdown concert “flumpool COUNTDOWN LIVE 2015→2016 ‘Hitsuji No Kawa Wo Kabutta Sarutachi No Uta Gassen’” at Yokohama Arena.

In 2016, the band released a single containing the theme song for the movie and TV series “Ajin”, “Yoru ha nemurerukai?” in February.
In March, they released “EGG”, the first original full album in nearly three and a half years.

With the new album “EGG”, the band is back on the road for a Japanese tour “flumpool 7th tour 2016 ‘WHAT ABOUT EGGS?’” for the first time in almost two years, performing 22 shows in 14 cites. In July, they performed headlining concerts in Taiwan and Singapore as additional shows of the tour, achieving great successes.

On November 2nd, the band released a single “FREE YOUR MIND” for the first time in about nine months. In the same month, they had a concert tour exclusively for members of their official fan club, which comprised of a music club tour “INTERROBANG Dayo! Zennin Shugo ~Moshimo flumpool ga Koukosei dattara~” and a concert at Maihama Amphitheater “INTERROBANG Dayo! Zennin Shugo ~Moshimo Christmas no Yoru datara~”.

In addition, on December 31st, they had their first headlining New Year countdown concert in their hometown Osaka, titled “flumpool COUNTDOWN LIVE 2016→2017 “FOR ROOTS ~Shiroten Fields Forever~”, which ended on a high note.

In March 2017, the band released “Last Call”, which was used as the theme song for the movie “Sakurada Reset”, and in May, they gave their third performance at Nippon Budokan with “flumpool 8th tour 2017 Beginning Special ‘Re:image’ at NIPPON BUDOKAN”.
After the show in Yokohama on December 3rd, Ryuta Yamamura was diagnosed with “functional dysphonia in singing”. In order for him to concentrate on his treatment, the band decided to go on a hiatus on December 5th.
On December 26th, the band released “Toutoi”. The song was conceived during the nationwide tour and developed with the audience.

On January 13th, 2019, the band played a guerilla gig in Tennoji, Osaka on their anniversary of formation and announced the resumption of band activities.
The band embarked on a fan club tour “flumpool FAN MEETING ~FM SAKAI 2019~” from February, and began their nationwide hall tour “flumpool 9th tour 2019 ‘Command Shift Z’” from May, which consisted 24 performances in 22 cities. In September, the band performed a headlining show in Hong Kong for the first time as a special performance of the same tour and finished the tour on a high note.
On May 22nd, they released “HELP”, which was their first single after resuming band activities.
On December 30th, the band held “flumpool year-end concert ‘FOR ROOTS’ ~Shiroten Fields Once More~”.

In February 2020, a new single “Subarashiki uso” was released. The song was featured as the theme song of Nippon TV’s Wednesday drama series “Shiranakute iikoto”. Following the single, the band released their first original album in four years “Real” in April.
In August, flumpool held “flumpool ‘FOR ROOTS’ ~Han Real~”, a one-night-only special livestream concert with the title ‘FOR ROOTS’, which is given to special concerts performed in their hometown Osaka. The band will embark on their 10th large-scale national tour “flumpool 10th Tour ‘Real’”, starting in October 2020 (36 performances in 31 cities in Japan).